University of Tennessee, Knoxville moves from plastic to mobile IDs

Implementing mobile credentials was a decision that affected almost every department at the University of Tennessee, Knoxville, a campus that boasts 29,000 students and 8,000 staff members. Even so, that decision came easily to Bill Strickland, director of operational services for finance and administration, due in no small part to the very vocal requests of students.

“We’ve had over the years—and I do mean years—different student committees come to us and tell us they wanted to do more with their phone,” said Strickland. “They wanted an app that could have some of the VolCard functions.”

UTK considered other potential solutions, but true buy-in from executive management didn’t come until CBORD presented the opportunity to be an early adopter of student IDs in Apple Wallet. That, according to Strickland, resulted in a trickle-down effect in which other departments jumped on board without resistance.

One convenient element of mobile credentials, Strickland found, was that despite students’ call for an app, they appreciated the fact that mobile credentials were available without the need for a separate app.

Prior to launch, Strickland’s team arranged for a pilot group of students to beta test, including representatives from student government, orientation leaders, and other interested students, amounting to roughly 50 people. Once the pilot group began their testing, they also began telling their friends, along with students who saw the mobile credentials in action. Before long, the group swelled to 150 by word-of-mouth alone.

The pilot group provided thousands of transactions across every use case, which bolstered Strickland’s confidence in the launch.

Preparing for the launch of mobile credentials was a campus-wide endeavor, involving several UTK departments, as well as teams at the university, CBORD, and Apple. On launch day, all three organizations created “war rooms” designed to proactively identify and rapidly resolve any potential technical issues that might arise. Luckily, said Strickland,

“We never had to do that. It just worked.”

In addition to in-person informational tents set up in high-traffic areas, roll-out included an announcement in the student newsletter. In the 15 minutes following the newsletter release, 1,000 phones had been provisioned to use Apple mobile credentials.

Strickland stressed the importance of interdepartmental collaboration to make the launch successful, saying,

“It really does take a village. We had marketing, public relations, creative services, IT, and dining; we had a lot of help.”

UTK was the first CBORD campus to launch student IDs in Apple Wallet in October 2019 and has since implemented mobile credentials for Android phones. Student response has been overwhelmingly positive—unsurprising, given their long-standing desire for a mobile solution.

“They’re using it, they love it, and I think they’re glad to get away from plastic. I think it has a coolness factor.”

Following implementation at UTK, Strickland has a piece of advice for any university considering the upgrade: the devil is in the details, especially in planning and laying the groundwork.

“If you even think you’re going to do it,” said Strickland, “start preparing now.”

And would he recommend it? 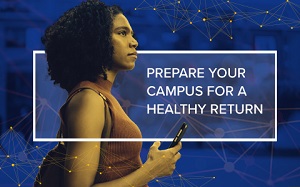